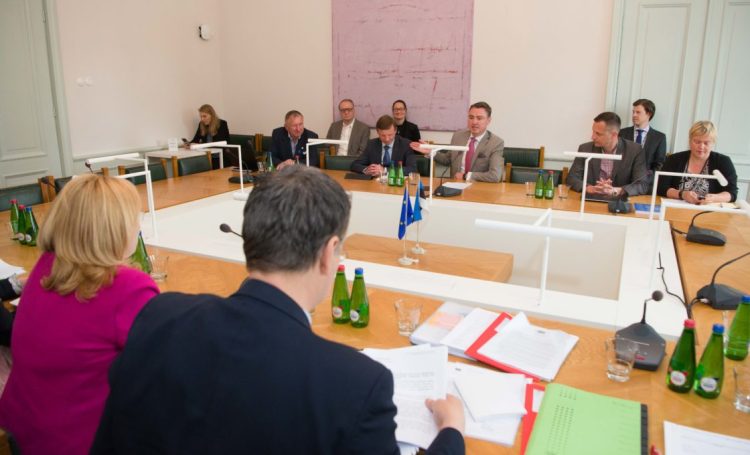 The members of the Finance Committee of the Riigikogu (Parliament of Estonia), headed by Deputy Chairman of the Committee Taavi Rõivas, met with European Commissioner for Regional Policy Corina Cretu at Toompea. The main topics discussed at the meeting were the new multiannual financial framework and the Cohesion Policy of the European Union.

Cretu gave an overview of the plan proposed by the European Commission for allocating the resources during the EU’s next funding period, and the distribution of the assistance from the Cohesion Fund. According to the plan proposed by the European Commission, the cohesion funds allocated to Estonia would decrease due to the growth of prosperity, but at the same time, the subsidies to agriculture and the opportunities to apply for finances to large projects would increase.

In Rõivas’s opinion, we can regard the proposed financial plan with cautious optimism, because in the countries where the gross domestic product has increased to more than 75 percent of the EU average, the cohesion aid will be cut by 24 percent instead of the expected 45 percent, and several other revenues will compensate that cut. In total, the European aid will remain in the same size category during the next seven years as it has been so far. “The decrease of the Cohesion Fund is based on the rapid economic growth of Estonia during the last seven years and the increase of our prosperity to 76 percent of the EU average. Actually, a more drastic decline was expected, and the proposal of the Commission is a reasonable compromise,” Rõivas said. He explained that according to the European Commission’s proposal, the finances allocated to Estonia from the EU budget would be the largest per capita in the whole EU.

At the meeting, Rõivas emphasized the need to follow the principle of equality of member states in distributing the EU funds and underlined the importance of the allocation of cohesion funds in ensuring the equality of different regions. He also said that the agricultural subsidies should be based on a more even distribution.

The European Commissioner for Regional Policy also introduced the time schedule for adopting the new multiannual financial framework of the European Union.