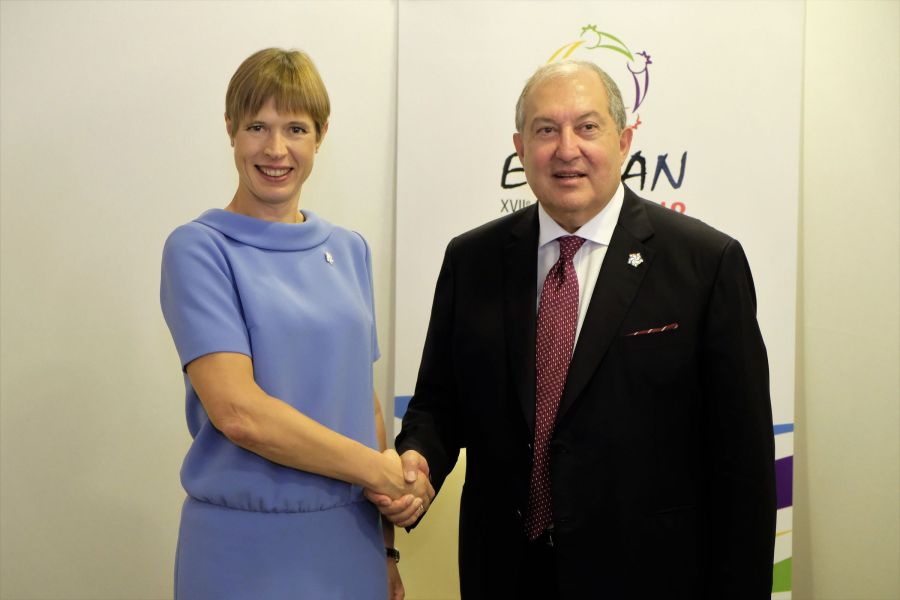 President Kersti Kaljulaid, who is currently on a working visit to Armenia, met yesterday in Yerevan with the President of Armenia, Armen Sarkissian. The main issues discussed at the meeting were the reform process in Armenia and closer co-operation between the two countries in the sphere of digital issues and tourism.

“There is a good co-operation between our countries, which has become closer in recent years. Armenia is living a life of changes and we are observing the reforms with great interest and keep our fingers crossed for the drive to continue,” said President Kaljulaid after the meeting with her Armenian colleague. At the meeting, the heads of state discussed at length the reform processes and the fight against corruption. President Kaljulaid expressed her hope that Armenia will continue to build closer relationships with the European Union; the foundation for that has been laid with the EU and Armenia partnership and co-operation agreement.

Co-operation between Estonia and Armenia has been close in the digital sphere, particularly with our e-academy. The Heads of State expressed hope for future close contacts and the exchange of experiences in this sphere. Tourism co-operation and possibilities for enhancing contacts were also discussed in depth together with security issues and developments in the region.

President Kaljulaid was yesterday and is today on a working visit to Armenia to meet the President and Prime Minister of Armenia and to take part in a summit of French-speaking countries in Yerevan. Estonia is an observing member of the organization and approximately 30 state leaders will take part in the summit. The main purpose of the visit is to introduce Estonia’s plan related to its candidacy for the position of a non-permanent member of the UN Security Council. Photos: Office of the President