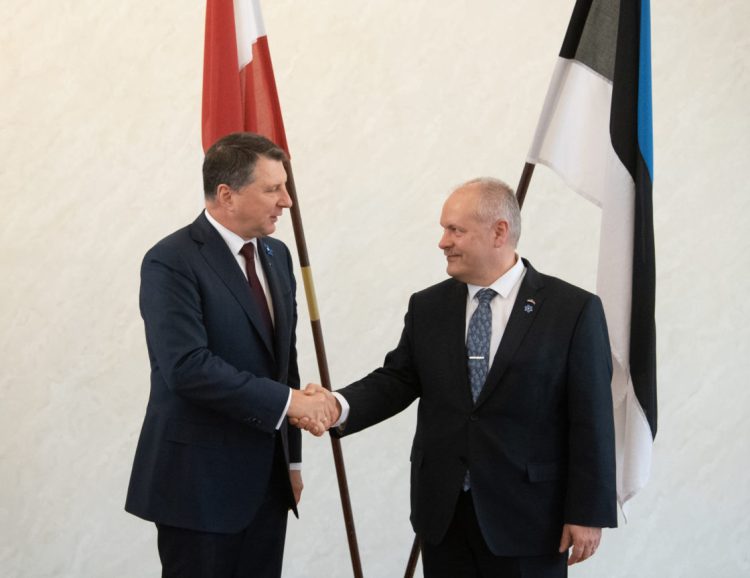 At the meeting of President of the Riigikogu (Parliament of Estonia) Henn Põlluaas and President of the Republic of Latvia Raimonds Vējonis today, the discussion focused on regional cooperation and the excellent relations between the two countries.

Põlluaas said that Estonia and Latvia were good partners and cooperated closely in different fields of life. “We have a similar history, our economic connections are strong, we have close cultural cooperation, and we are interested in having both closer digital cooperation and closer cross-border cooperation,” Põlluaas emphasised.

Põlluaas believes that Estonia and Latvia share common values also in the strengthening of the security in the region and in NATO, which is proven by the establishment of NATO Multinational Division Headquarters North in Ādaži, where the command is comprised of officers from Denmark, Latvia, and Estonia.

Public services in the border regions and possibilities for improving the cross-border cooperation between Estonia and Latvia, as well as regional connectivity,  were also spoken about at the meeting.

The President of Latvia congratulated the President of the Riigikogu on his appointment to office. He assured that Latvia was a good friend of Estonia, and agreed that there was much in common in history and today’s cooperation of the two countries. Vējonis said that the cooperation between the three Baltic States was constantly developing, and it was very effective and necessary.

The President of Latvia was also interested in the forming of the Government of Estonia. The President of the Riigikogu gave an overview of the situation in Estonia after the elections and expressed hope that in a few weeks, the new Government would assume office.

Chairman of the Estonia-Latvia Parliamentary Group Aadu Must also participated in the meeting. He gave a brief overview of the parliamentary cooperation of the Baltic States and wished Latvia success in the Presidency of the Baltic Assembly.